An emotive debate between maritime heavyweights opened the 31st edition of the Seatrade Awards, where a brand-new parliamentary-style debate focused saw the smart shipping, automation and its benefit to the maritime industry come under the spotlight.

The motion, titled “This House believes that the early adoption of smart technology and automation will be an unqualified benefit for the maritime industry at sea and on land” saw two teams of maritime thought-leaders take part in a thrilling debate, which culimated in the audience providing the anticipated verdict.

Debate chairman Harry Theochari, Chairman of Maritime UK and Partner – Global Head of Transport at Norton Rose Fulbright LLP, found himself challenged to keep the debate under control, and when it came to the final vote from the audience, the ays had it – 59.3% for and 40.7% against.

Theochari began by introducing the panels for each side, before each member presented their arguments to the audience. A honest and lively conversation ensued, as this topical and emotive subject was brought to life.

The debate touched on the biggest concerns, challenges and opportunities facing the global maritime market. While the potential for increased fuel efficency; more accurate analysis and a more profitable industry was clear, the sentiment of the workforce affected by such changes was never far from the debate. 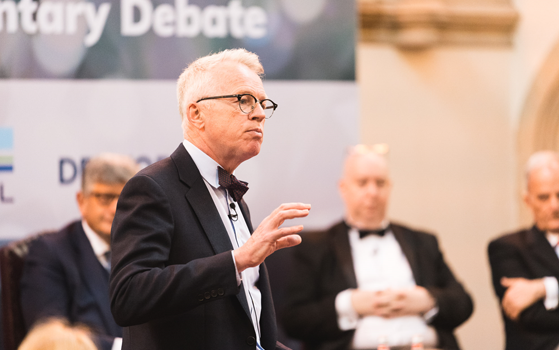 Member of the opposition Paddy Rodgers, then enjoying his final day as CEO of Euronav, made his side's argument clear

"Humans use far more subtle means of communication. Do you trust the technology? Do you trust the people who designed it? Your choice is simple. Support human engagement over artificial intelligence," remarked Rodgers.

A member of the audience continued the theme with a posing question, asking whether enough resource will be dedicated to preparing the crew to "make effective use from early adoption; when recent history suggests the contrary".

However, member of the team debating in favour of the motion Ronald Spithout, President of Maritime for Inmarsat responded.

"The ones going to sea in a couple of years time have already adopted all kind of technology that currently is not available in shipping. If you recruit crew for the future, a lot of them will ceompletely understand what is going on, much better than we are in the industry today," remarked Spithout.

Fellow team member Julian Clark, Global Head of Shipping, Hill Dickinson LLP, concurred, stating that "technology is moving at the speed of a bullet.
We cannot continue to chase it on a bicycle."

However, Rodgers responded: "Although replacing the experience of a human crew with expert systems can be achieved, we would subsequently be losing out on other essential seafaring qualities, such as leadership."

Members of the audience were invited to give their vote at the close of the debate, with the results announced during the evening's celebrations for Seatrade Awards 2019.

"Over the years, we’ve been looking for ways to provide alternatives to the traditional conference formula. The parliamentary formula is great because it gives the opportunity for people to debate; explore; explain their views on quite contentious subjects," remarked Hayman.

Debaters in favour of the motion:

Debaters against the motion: