Introducing maritime’s most innovative and outstanding companies and individuals - the winners of 2020 Seatrade Maritime Awards International. 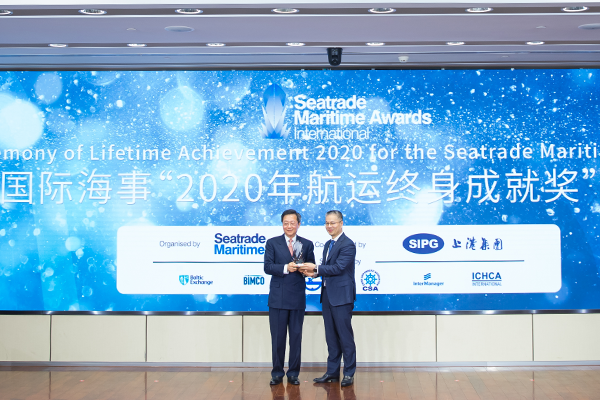 Capt. Xu Lirong is a major figure in this industry, with a reputation extending around the world. His association with shipping and the sea began in 1975, when he realised his boyhood dream of becoming a seafarer, at the age of 18. His potential became clear when he was promoted to be China’s youngest sea captain at the age of just 26.

In 1999, he planned and directed the reform of COSCO’s container shipping system, a process which defined the development of China’s container shipping industry in the years ahead. He was appointed Chairman of COSCO Shipping in 2016, a role from which he led the reform and restructuring of the world’s biggest shipping company. Since then he has been fully occupied in exploring new channels of international cooperation in shipping and logistics, to match China’s engagement in the global economy, whilst also promoting a new ecology and a digital transformation for international shipping. 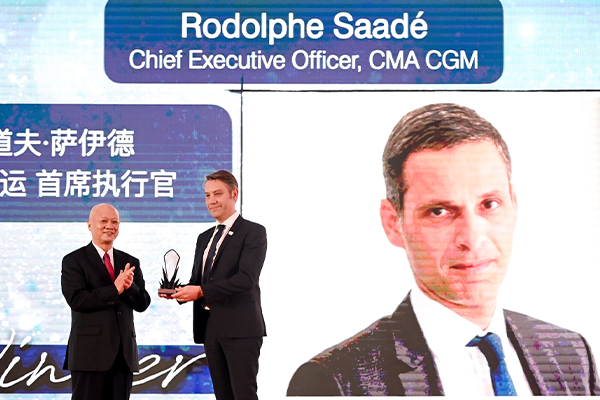 Joining a leading shipping group in 1994 led by his father, Rodolphe Saadé played important roles around the business in New York, Hong Kong and eventually, at the head office in Marseille. In 2004, he was appointed Executive Officer in charge of developing regular lines on the North/South axis and appointed Vice Chairman and member of the Group’s Board in 2010. It was in this role that he oversaw the financial restructuring of the Group that same year. More recently, Rodolphe has conducted talks that led to the signature of OCEAN ALLIANCE, a strategic and ambitious operational agreement with Cosco Shipping, Evergreen Line and OOCL. And since his nomination as the Group’s Chairman & CEO in 2017, he has been implementing a new strategy to steer the Group into the future. The recent delivery of the world’s largest LNG powered containership represents a major milestone for the group’s objective of carbon neutrality and incidentally the ship was named in honour of his late father, founder and first chairman and CEO of the group. 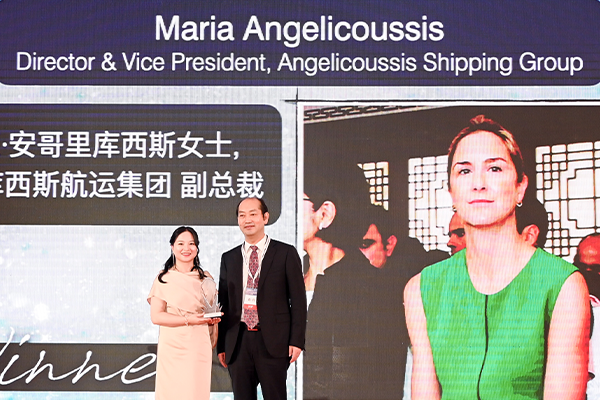 Young Entrepreneur of the Year Award

Maria Angelicoussis is a dynamic leader and has led fleet expansion, vessel diversification and a major commitment to human resources and training. Maria is fast becoming one of the leading lights in the LNG & LPG carrier market demonstrating a clear recognition of the vital importance of training in the LNG business. As Vice President at one of the largest privately held shipping groups in the world, and part of a family-run business in a highly competitive environment, she has huge entrepreneurial spirit. Now actively involved in all aspects of the Group’s activities, Maria’s predominant focus is with their newest business unit focussing on a young fleet of LNG, LPG and FSRU vessels. 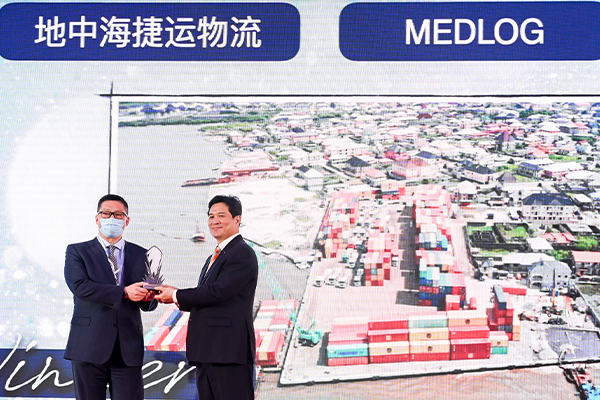 Logistic Solution of the Year Award

Concept of the project revolved around creating a seamless flow in the logistics chain from point of origin to the final destination, thus optimising efficiency in the most cost-effective manner.
The bottlenecks were obvious. Deteriorating roads surrounding ports, complex logistical & clearing processes, and lack of reliable equipment available to manage the transition from point A to B. Medlog eliminated the consequences of using infrastructure that surrounded the ports by setting up a barge terminal, streamlined the clearing & forwarding complexities through its Inland Container Depot, and Empty Return Depot, and acquired all the relevant equipment.
Result: A reliable logistics partner. 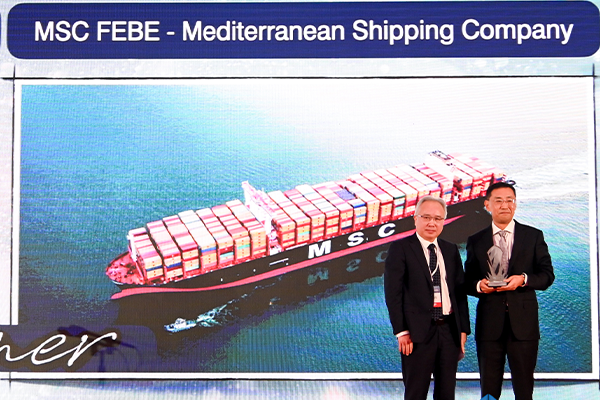 Ship of the Year Award

MSC FEBE is part of a new Gülsün-Class of 23,000+ TEU vessels, added in 2019-2020 to MSC’s global shipping network.
Built at the Samsung Heavy Industries (SHI)Geoje shipyard in South Korea, MSC FEBE (total capacity of 23,756 TEU) sets a new standard in container shipping, especially in terms of environmental performance and safety.
State-of-the-art design and engineering minimises the wind resistance of MSC FEBE, resulting in lower fuel consumption and maximising energy efficiency. The ship is also one of MSC’s ships to be awarded a new “FCS notation” from the classification society DNV in relation to fire safety on board.

The judges gave a high commendation to ‘Silver Origin’ from Silversea Cruises for being an innovative Cruise vessel with impressive environmental credentials including dynamic positioning systems and the highest of energy efficiency standards. The financing project for the 12 dual-fuel LR2 tanker newbuilds is groundbreaking. It demonstrates the support of Bocomm Leasing, China’s largest shipping lessor, for a more sustainable shipping industry incorporating environmental and social responsibility. Featuring a time charter agreement with the vessel user, the $650m deal also represents a future trend in ship leasing model that aims to provide packaged solutions for our commodity and transport clients.

The judges chose to give Stephenson Harwood a high commendation for this category for helping secure US$4bn fundraising for Carnival. 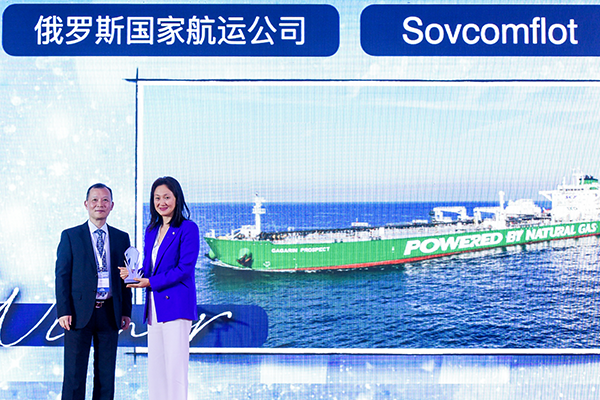 Shipping Company of the Year Award

PAO Sovcomflot (SCF Group) is Russia’s largest shipping company and a global leader in energy shipping, specialising in crude oil, petroleum products and liquefied gas transportation as well as servicing offshore upstream oil and gas installations and equipment. The Group’s fleet comprises 147 vessels with a total deadweight of over 12.7 million tonnes and an average vessel age of 10.8 years.
SCF has over 7,800 employees and is registered in St. Petersburg, Russia with offices across the country as well as in London, Limassol, and Dubai. 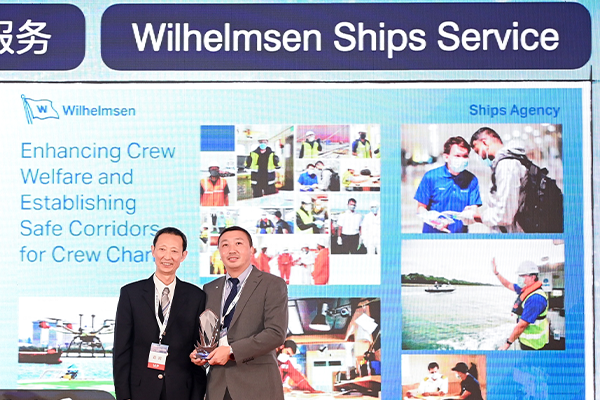 “Smart, digital tools and establishing safe corridors for crew change in a time of COVID-19”.
Wilhelmsen Ships Service empowered the maritime industry to keep up with the dynamic COVID-19 situation through interactive maps with port restrictions info, crew testing availability, layup locations and e-advisor, garnering over 550,000 unique users and 1.6M views.
Focusing on the practicalities of safe crew change, Wilhelmsen Ships Service crafted frameworks and worked with regulators to develop protocols for safe crew change corridors between countries. To enhance crew welfare, technology was utilised creatively to drone deliver food to vessels at anchorage, as well as to carry out virtual religious services and virtual doctor consultations for crew.

The judges gave a high commendation to Orient Overseas Container Line who has supported the global community to tackle regional and international issues such as donating containers to the Australian community following the severe bushfires to establishing a COVID- 19 charity fund in the region. 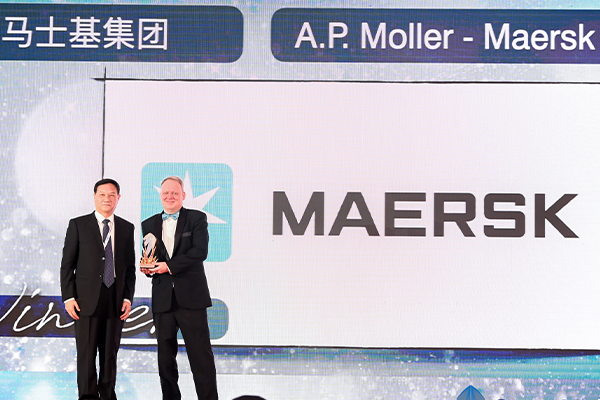 Special Award for Response to the Pandemic

A.P. Moller - Maersk has shown great strength of leadership, innovation and agility in response to the challenges presented by COVID-19. The company have provided an example to the industry in how to exceed customer expectations and requirements whilst simultaneously reducing their costs. One of many major impacts of the crisis has been a shortage in road trucking capacity in many key regions and they have transformed key areas of its service offering by moving operations from road to rail and sea.
This innovative approach has helped reduce the strain on road capacity shortage, saved customer’s money and delivered a positive environmental impact through reduction of CO2 emissions in local supply chains. A.P. Moller – Maersk has shown great leadership and cooperation with key stakeholders such as port authorities and operators to help reduce the overall impact COVID-19 has had on intra-regional supply chains. All with a clear focus on the customer and ultimately, the consumer. 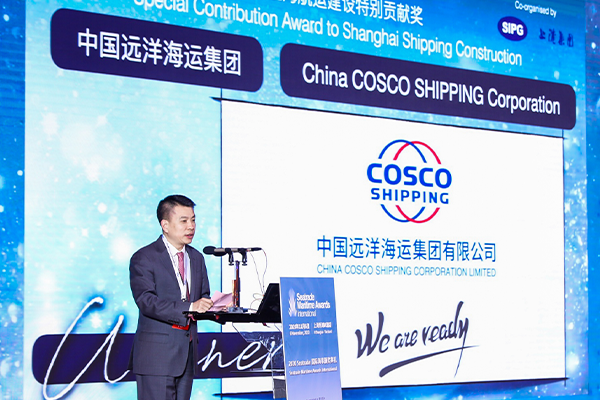 Headquartered in Shanghai, this company ranks first in the world in terms of comprehensive fleet capacity, with its container fleet the third largest in the world, and the capacity of dry bulk, tanker and general cargo fleets the largest in the world. China COSCO SHIPPING Corporation takes Shanghai port as its transit centre and ranks first in terms of international transit business in Shanghai Port in 2018 and 2020. The company has long been committed to strengthening port and shipping digital cooperation, improving port automation and intelligence. They have made outstanding achievements in promoting the breakthrough development of shipping centres and building digital cooperation between port and shipping.